Do you want to know more about gum?
read this and find out about gum.
By:Riley

In 1848, North Americans used to chew sap off of spruce
trees. Some early Americans chewed
gum from trees and beeswax. John
B. Curtis made the first
commercial about chewing gum it was called the State of Maine pure spruce
gum.
Indians from new England taught Americans to stop there thirsts
by chewing the gum resin it forms on a spruce tree.
When its bark is cut. Spruce trees were sold in the eastern united
states,  They made it the first
commercial chewing gum. 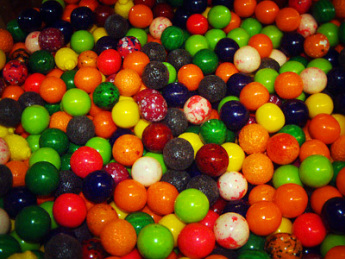 What food source did they use to make the gum?

Gum is sweetened, By latex; it’s a milky white fluid it’s made by
a
lot of seed plants. Its best known as the principle.
Gum has no neutral
value.   When people have finished chewing
it they  either swallow it or
spit it out.  In  the history, people may have
selected naturally chewy and
substances br5eath  fresheners. There are a few
tribes that made different
kinds of Gum The Greek  used mastic tree resin; The
Italian used
frankincense; the West Indians, used  aromatic twigs;
the Arab’s used
beeswax.

When did they make gum?

Gum has a history that goes on forever as far as the ancient
Greeks,  who chewed the resin from the mastic trees. However it wasn’t until
Walter  dinner happened in 1832, he made the perfect recipe for gum he made the
very  first bubble.